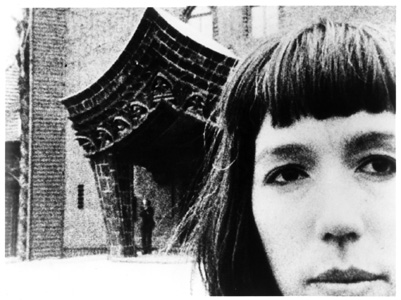 While working at the Canadian Filmmakers Distribution Centre I started up a magazine called the Independent Eye. I had already set to work revamping the artists’ files which soon overflowed with correspondence and new frame enlargements and everything these artists had ever scratched out on menus and bar coasters. There were council grants and drawings from childhood, interviews, rumours, and whatever I could glean from undusted shelves and basement drawers. Some of this material was too fine to be stowed away for passing notables, it needed to get out where perfect strangers might encounter it. I edited the first five issues then left for Vancouver. Four issues followed before tents were folded. 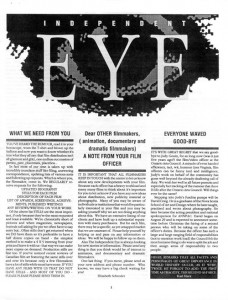 Avant Garde’s Contemporary Paradox by Bart Testa – 3
Letter by Peter Lipskis – 3
Film: The Medium About To Be Lost by Arthur and Corinne Cantrill – 4
On The Edge by Peter Rose – 6
Experimental Film by Leila Sujir – 11
Letter from Martin Rumsby – 11
Jack Chambers by Stan Brakhage -12
The Art of Worldly Wisdom by Bruce Elder – 13
Un Mes Y Medio (A Month and a Half) by Isabelle Rousset – 15
Passing Through/Torn Formations by Philip Hoffman – 15
What We Will Know by Ellie Epp – 16
Untitled Film by Fenway Crane – 17
Part One: 13 Encounters with Images by Jeffrey Paull – 18
Nothing Personal by Al Razutis – 21
Desire in Ruins by Smile – 23 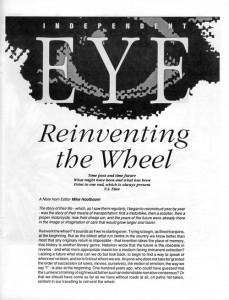 Cinedementia – 4
The Avant Garde, into the ‘80s by Steve Anker – 6
Gently Down the Stream by Su Friedrich – 12
Body and Time: The Films of Barbara Sternberg by Vivian Darroch-Lozowski – 13
Her Soil is Gold, Iconography of Venus, There is in Power… Seduction, The Tyranny of Architecture by Annette Mangaard – 16
Ville? Quelle Ville? by Midi Onodera – 19
Richard Raxlen: A Letter – 20
Peter Lipskis: A Letter – 20
Ann Gronau Interview by Mike Hoolboom – 21
Female Spectatorship by W5 – 30
Nicaragua, Sandanista, Reagan, Mediashun by Media-Counter – 32
On Becoming a Resident Alien by Raphael Bendahan – 33
The Forer Structured Sentence Completion Test – 35
Stan Douglas Talks at YYZ – 36
The Art of Animation in Toronto by Ellen Besen – 40
Announcements, Congratulations, News – 41
New Films – 42 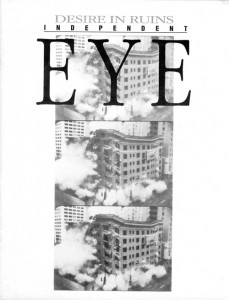 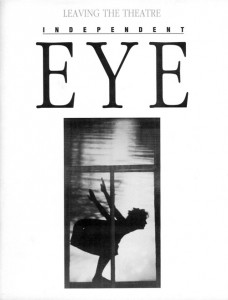 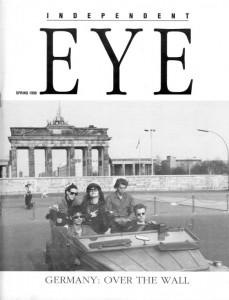 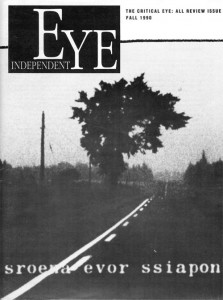 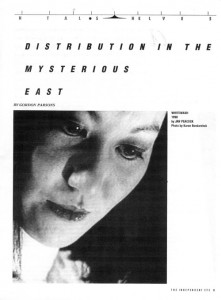 International Reports
Reclaiming Another Desert: Distribution of Film Art in Australia – 18
Distribution in France: An Account ad Some Considerations Concerning Experimental Film by Rose Lowder – 22
Switzerland: Signs of Activity and an Important years Event in Lucerne by Rose Lowder

Points of View
Setting the Focus: Distributing Women’s Work in Canada by Margot Lacroix – 29
Connecting Voices: an interview with Richard Fung by James MacSwain – 32
Finding the Audience: A Review of the Immediate Impact conference by Helen Lee and Michael Zyrd – 38
NFB: Friend or Foe of the Independent Filmmaker? by Bonnie Baker – 43
Thoughts on an Invisible Cinema by Martin Rumsby – 46
Fropm The Diary of a Travelling Film Show by Martin Rumsby – 49
Why The Film You’re making Won’t Be Seen In Canada by Mike Hoolboom – 54 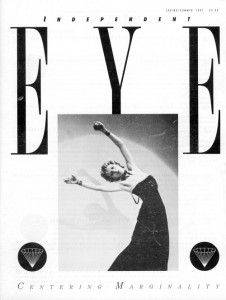 A High-Heeled Point of View: an interview with Gwendolyn by Kim Derko – 2
Passonate Dialectics Revisited: Women and Film in the University by Catherine Russell – 9
Sally’s Beauty Spot by Kass Banning – 17
Elements: Lines from a Film I Will Not Make by Ann Marie Fleming – 22
The Problem of Authenticity in Documentary Filmmaking by Yasmin Jiwani – 26
Four Asian Film/Video makers: No Longer Powdered White by Larissa Lai – 31
Negotiating Representation: Notes on Community-Based Film and Video in Canada by Judith Doyle – 36
Privilege: A New Politics of Difference by Brenda Longfellow – 40
A Cautionary Tale: The Lure of Centre in Yvonne Rainer’s Cinema by Ivone Margulies – 48

Answer Print: An open letter from Barbara Sternberg to Leila Sujir on the occasion of seeing several films by Marie Menken for the first time – 59
Announcements – 60 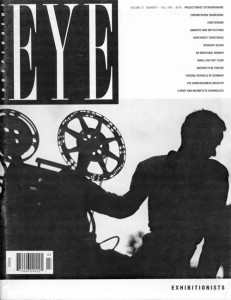